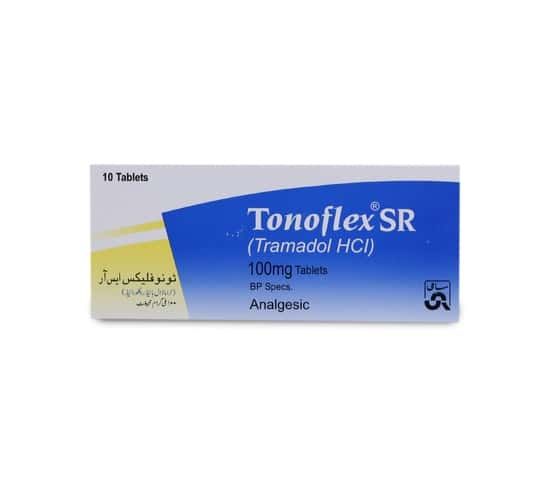 {{Product}} is a synthetic opioid analog that produces pain suppression at the Central Nervous System (CNS) level. {{Product}} is clinically prescribed to reduce moderate to severe pain in adults. It modifies the pain perception and response in the brain by acting as an agonist to the opioid receptors involved in analgesia.

{{Product}} is also known to act as a serotonin reuptake inhibitor (SNRI) which makes it a potential agent to cause withdrawal symptoms in those who stop using it abruptly. This means that it also has anxiolytic and antidepressant effects to some extent so that Tonoflex SR 100mg Tablet 10 'S is an effective drug to be given to individuals who are suffering from depression and anxiety associated with pain.

Long-term use of Tonoflex SR 100mg Tablet 10 'S is associated with addiction that can lead to overdose and toxicity, especially when it is used along with other opioid analgesics and antidepressants. There is also a risk of serious breathing problems along with sleep apnea. That’s why the usual practice is to initiate the therapy with the least possible dose for the shortest possible time.

{{Product}} also acts on certain pain modulators and inflammatory markers. This suggests that Tonoflex SR 100mg Tablet 10 'S has a broad spectrum of acting as a potent pain-killer which is why it is an effective supportive therapy in the management of neuropathic pain, osteoarthritic pain, fibromyalgia (muscular pain that involves whole-body), back pain, labor & post-operative pain, and pain associated with tumors.

{{Product}} produces inhibitory effects on the ascending pain pathways by binding to the opioid mu receptors partially (agonistic effect) at the CNS level. {{Product}} also weakly inhibits serotonin and norepinephrine reuptake. These neurotransmitters are involved in descending pain perception and Tonoflex SR 100mg Tablet 10 'S makes them available to produce descending pain modulation. This way, {[product}} works in synergism with the central nervous system for the modulation of pain perception and response.

{{Product}] also produces analgesic effects by affecting other pain modulators in the CNS and markers of the inflammation involved in immune responses such as Prostaglandins E2, Cytokines, and Glial cells. This action aids in multiple clinical manifestations which require pain management as a supportive treatment such as osteoarthritis, labor, and post-operative pain.

{{Product}} should be taken orally (by mouth) with water irrespective of the meal.

50-100mg 6 hourly can be administered for acute pain. The progression of treatment depends upon the clinical response to the dose.

The dose should not be exceeded more than 400mg per day in both cases. The need to continue the treatment is decided after close monitoring of withdrawal symptoms.

{{Product}} is usually given for round-the-clock treatment as 100mg once daily. The dose can be modified to 100mg per day every 5 days, and should not be exceeded more than 300mg each day.

{{Product}} should not be given to children below 12 years of age.

{{Product}} is contraindicated to be used in pregnancy as it may cause withdrawal symptoms in the neonate. It may also cause respiratory depression in infants if administered to the mother during labor. {{Product}} should not be taken by breastfeeding mothers as well as its active metabolite releases in breast milk and may harm the neonate.

The use of Tonoflex SR 100mg Tablet 10 'S is contraindicated in the following scenarios:

{{Product}} should be taken with caution under the following circumstances:

Taking higher doses than recommended increases the risk of seizures, especially in people who are on opioids or antidepressants.

Interactions With Other Medications

{{Product}} is known to have interaction with some medications. Concomitant administration of them should be avoided:

Except for Alvimopan (compete for the receptor site), all other agents increase serotonin levels in the CNS and hence may put the patient at risk of Serotonin Syndrome.

Other agents that should be avoided during the treatment with Tonoflex SR 100mg Tablet 10 'S are:

{{Product}} has the potential to cause:

How To Cope With Some Of The Adverse Effects

{{Product}} starts producing an analgesic effect within one hour of swallowing.

You should not consume alcohol during or after a certain period of treatment as it may make you feel drowsy and enhance the chances of developing side effects such as breathing difficulty.

{{Product}} tends to develop withdrawal symptoms in you as it centrally acts on the nervous system. You should not stop using it abruptly or should not deviate from the dosing schedule set by the prescriber.

There is a risk of exposure of the infant to serious side effects associated with the use of Tonoflex SR 100mg Tablet 10 'S. So it should not be given to a breastfeeding mother as its active metabolite is secreted in breast milk.

{{Product}} can be stored at room temperature, below 30ºC. Protect it from moisture and direct sunlight.

{{Product}} is taken for pain management and usually taken once daily. But if you miss the dose, take it whenever you remember throughout the day.

The caregiver should look for breathing difficulties in case of overdose. Performing CPR (Cardiopulmonary Resuscitation) is helpful until the patient doesn’t get medical help. Naloxone is an active agent that reverses the effect of an opioid overdose. The medical practitioners give   Naloxone as an antidote to Tonoflex SR 100mg Tablet 10 'S toxicity.