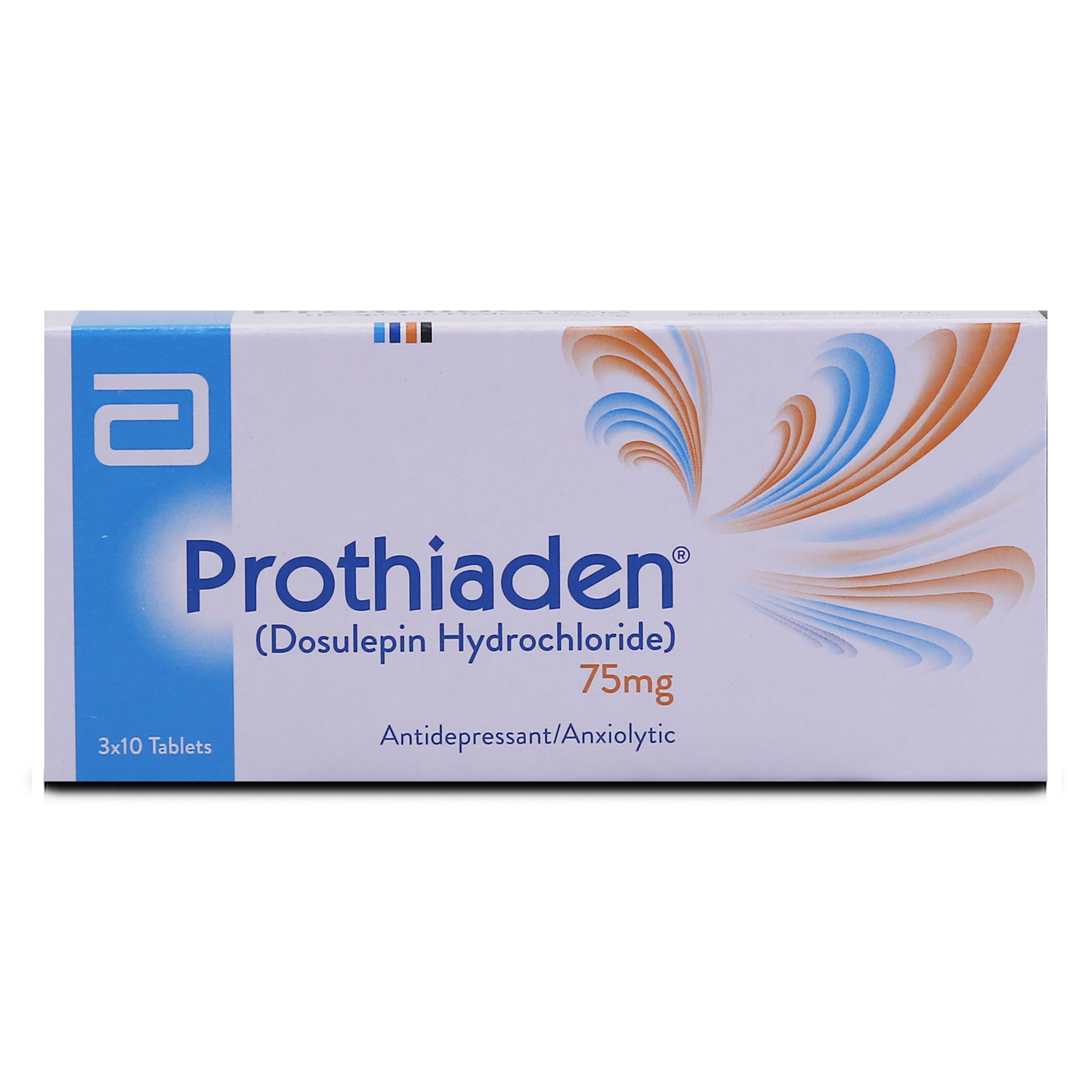 Prothiaden 75mg Tablet 10 'S functions as a tricyclic antidepressant that is consumed only on the recommendation of a medical expert. a tricyclic antidepressant functions by intercepting the reabsorption of serotonin and norepinephrine. The medication might also be prescribed in low dosage to treat symptoms of depression that can include feelings of sadness, hopelessness, suicidal thoughts, poor sleep, or appetite due to no energy.

The medication can begin to show results in 1-3 weeks. From the start of medical, ion the patient's skin might become sensitive towards exposure to sunlight, and is required to use sunscreen and avoid the sun. The Prothiaden 75mg Tablet 10 'S comes in the form of a tablet that can be ingested with water and with or without food. The dosage recommended is initially low and then gradually increased by the patient's condition. In the initial week, medication might intercept the patient's thoughts and cause side effects, in that case, the patient is advised to contact a doctor right away

{{Product}} can also be used to treat:

How Does {{Product}} Work

Prothiaden 75mg Tablet 10 'S is a tricyclic antidepressant that functions by growing the levels of chemical messengers that commonly perform the task of stabilizing and uplifting the mood levels in the brain. Prothiaden 75mg Tablet 10 'S also performs the task of stopping the brain from releasing chemicals that lead to anxiety while also relieving the patient from symptoms such as restlessness, irritability, sleep disturbance.

Initially, patients might be prescribed a lower dose of medicine for 1-2 weeks and then increase gradually. The dose prescribed in the beginning can be 25mg thrice a day or 75mg tablet once a day. The dose can then be increased by the patient's condition and reaction towards medicine. The dose can be increased by the doctor to the maximum level of the patient consuming 225mg of Prothiaden 75mg Tablet 10 'S once daily but that is only done in severe cases.

Patients are recommended dosage in accordance to their condition and reaction towards the medicine. The initial dose might be low and then increased gradually. They have commonly prescribed 25mg thrice a day or 75mg a day but it can vary in regards to their condition.

Prothiaden 75mg Tablet 10 'S has not shown any strong evidence of harm to pregnant women or the fetus but should still be avoided as it might have a few side effects but if considered highly necessary, It should only be consumed under the supervision and prescription of a medical expert.

Nursing mothers are suggested to avoid the use of {{Product}} as much as possible as it may carry down into breast milk in small amounts but has not shown any significant evidence of harm to the infant. If the consumption is highly necessary, it should only be done under the special care of medical experts.

Please inform your doctor about the following before consuming Prothiaden 75mg Tablet 10 'S:

Interactions With Other Medicines

How To Cope With Some Adverse Effects

Dry Mouth- Can be helped by sipping water throughout the day, chewing sugaitiverless gum and using alcohol-free mouthwash, allowing ice to melt in the mouth, or using a saliva substitute.

Headaches- In which case make sure you rest and drink plenty of fluids. Avoid the use of alcohol. Take a prescribed painkiller. Consult your doctor if the headaches last longer than a week or are severe

Feeling or being sick (nausea or vomiting) or diarrhea -Avoid eating rich or spicy food. It might help to take medication after food. If you're sick, try drinking small, frequent sips of water.

Feeling dizzy (lightheaded) or weak -If the medication makes you feel dizzy or weak, stop what you're doing and sit or lie down until you feel better and do not rise too fast or immediately fr a sitting or lying down position to a standing posture. Do not drive or use tools or machinery in case of any of these effects.

Constipation- Can be combated by adding more fibers to the patient’s diet, asking the patient to drink plenty of fluids, and increasing their physical activity to trigger contractions in the intestines.

Prothiaden 75mg Tablet 10 'S is to be kept away from the reach of children n, in a cool dry place away from direct sunlight and humidity as that tends to ruin certain drugs.

If you miss a dose of the medication, make sure you take it as soon as possible on that same day. If you don’t remember you missed the dose until the next dosage time or that day, do not double the dose and take your medication as per schedule.

{{prodProthiaden 75mg Tablet 10 'S is to be ingested orally with water to help the tablet flow down the throat easily. It can be consumed with or without food and should not be chewed or crushed. Prothiaden 75mg Tablet 10 'S should be ingested only as directed by the medical expert. The medicine should be consumed daily if instructed by the doctor.

No, there isn't sufficient evidence to suggest that patients experience a decrease in fertility.

Q7. CAN Prothiaden 75mg Tablet 10 'S CAUSE DIZZINESS? IF SO, HOW SHOULD I MANAGE IT?

Yes. It can cause dizziness as one of the most common side effects. If this happens, you should sit or lie down until the symptoms pass. However, please note this is temporary and usually goes away as the treatment continues. It is also advised to avoid the consumption of alcohol during your treatment, as it may worsen the dizziness.

Q8.WHY MUST I PROTECT MY SKIN FROM THE SUN WHILE TAKING Prothiaden 75mg Tablet 10 'S?

Prothiaden 75mg Tablet 10 'S can cause skin sensitivity resulting in the skin being damaged hence it is important patients must we are going out and avoid the sun.

No. This drug has shown no evidence to prove addiction of any kind in any patient.

Alcohol is also known to lower your blood pressure which if taken with the medication may lead to extreme dizziness. It is best to avoid the intake of alcohol during your treatment