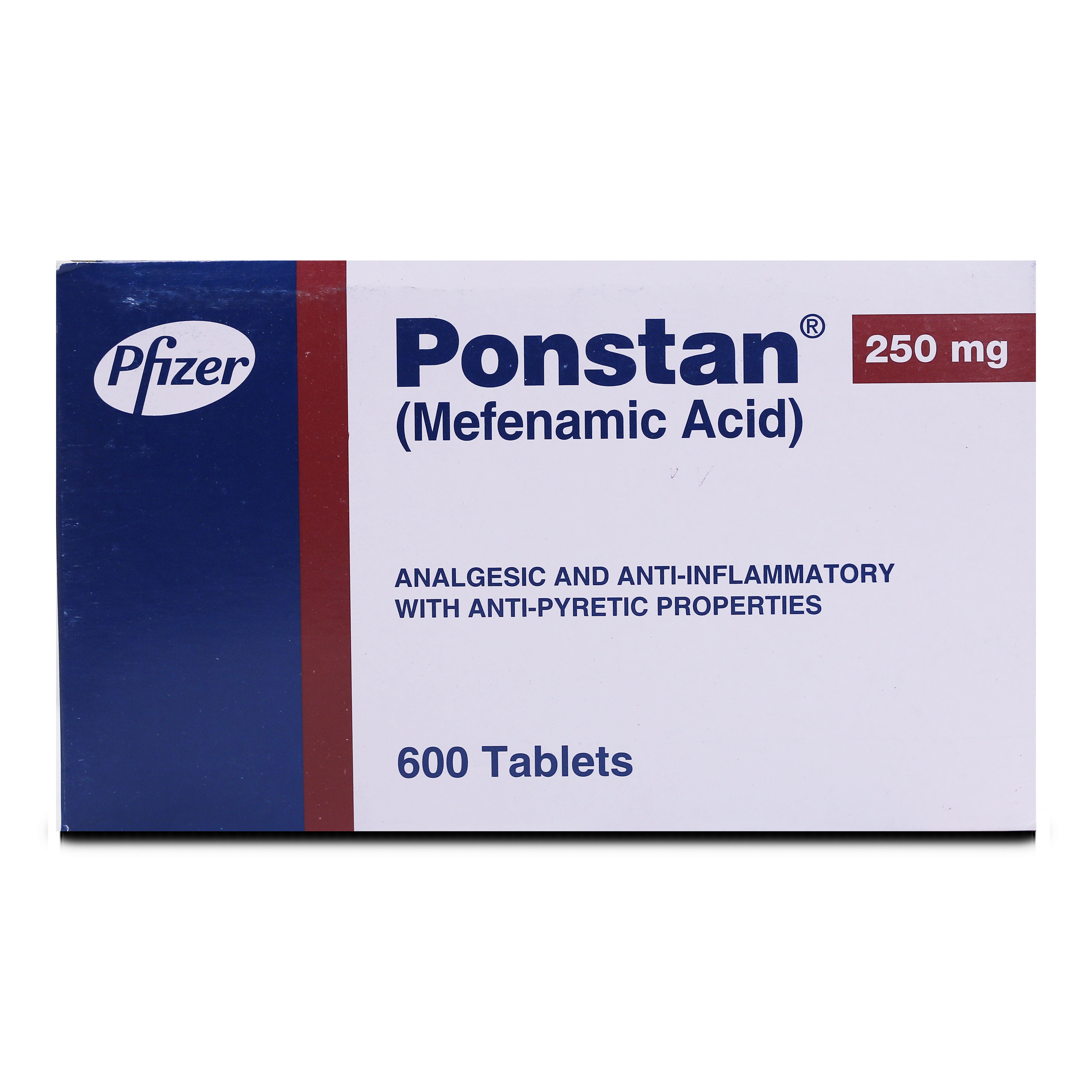 Ponstan 250mg Tablet 10 'S is a nonsteroidal anti-inflammatory drug (NSAIDs) and is available in tablet form. Ponstan 250mg Tablet 10 'S is used to treat moderately severe pain, such as headaches, muscular aches and pains, menstrual cramps, and dental pain. This medication reduces pain and inflammation while being taken, but it does not treat the underlying cause of the discomfort.

Ponstan 250mg Tablet 10 'S contains Mefenamic acid as an active ingredient which is a non-steroidal anti-inflammatory drug that has analgesic and antipyretic characteristics. It mainly works by inhibiting prostaglandin activity. This drug is usually indicated to treat mild to moderate pain in adults and children aged 14 and above for a short period of time (7 days or less).

Ponstan 250mg Tablet 10 'S is available in tablet form that is taken by mouth usually 1 to 4 times a day by an adult and 1 to 2 times a day by a child (above 12yrs) with or without food or as directed by your doctor. This medication can be taken with food or milk in case of stomach upset.

Common side effects of this medicine include diarrhea, constipation, nausea, anorexia, flatulence, etc. Ponstan 250mg Tablet 10 'S can increase the risk of fatal heart attack and stroke so avoid using it before or after heart bypass surgery (CABG/coronary artery bypass graft). NSAIDs like mefenamic acid can induce stomach ulcers, bleeding, and perforations in the intestine. These issues can arise at any point during therapy, without warning symptoms, and can result in death.

1. Antiinflammatory analgesic for symptomatic relief of:

2. Menorrhagia (heavy or prolonged menstrual bleeding) due to dysfunctional causes and presence of an IUD (intrauterine device)

This medication can be used for several other conditions not included in this prescription guide.

The suggested adult dose (for those over 14 years old) is 500 mg for the first dose, followed by 250 mg every six hours as needed, with treatment lasting no more than one week.

Treatment for menstrual cramps is usually not required for more than two or three days.

This medication in tablet form is not recommended for children under 12 years of age. Children above 12 yrs can take 1-2 tablets per day.

The dosage for the elderly is the same as for adults. Ponstan 250mg Tablet 10 'S has been administered at standard dosage in trials that included many old patients, although no pharmacokinetic or clinical investigations specifically for the elderly have been conducted.

Unless the hazards outweigh the benefits, this medicine should not be used during pregnancy.

Mefenamic acid can be passed on to the baby through breast milk. Unless your doctor advises otherwise, you should not use Ponstan 250mg Tablet 10 'S while breastfeeding.

Do not take Ponstan 250mg Tablet 10 'S and consult your doctor if you have a medical history of any of the following:

Take special care and please tell your doctor about any of the following conditions before using Ponstan 250mg Tablet 10 'S:

Interactions With Other Medications

Consult your doctor about the use of the following medicines before using Ponstan 250mg Tablet 10 'S:

This document does not contain all probable drug reactions, it is advisable to keep a list of medicines in use and discuss it with your doctor ( this includes prescription/nonprescription and herbal products).

Following side effects may not require immediate medical attention until becomes troublesome:

This is by no means a complete list of possible negative effects. Contact your doctor or pharmacist if you experience any other side effects not listed above.

Because Ponstan 250mg Tablet 10 'S may induce serious and fatal infusion responses followed by cardiac collapse, the following side effects may require rapid attention and report to your doctor:

How To Cope With Some Of The Adverse Effects

Keep Ponstan 250mg Tablet 10 'S in a container at room temperature. Protect from heat. Store in a cool, dry location. keep all medications in a secure location and should be kept out of the reach of children and pets.

In case of too much consumption contact, your doctor immediately as Ponstan 250mg Tablet 10 'S may cause stomach pain or tenderness, diarrhoea, muscular twitches, seizures (fits), confusion, dizziness, or hallucination

If you miss a dose of the medication, make sure you take it as soon as possible on that same day. If you don’t remember you missed the dose until the next dosage time or the next day, do not double the dose and take your medication as per schedule.

Ponstan 250mg Tablet 10 'S is not suggested in women who are trying to conceive since it may decrease female fertility. Withdrawal of mefenamic acid should be considered in women who are having trouble conceiving or who are undergoing infertility investigations.

Yes. It can cause dizziness as one of the most common side effects. If this happens, you should sit or lie down until the symptoms pass. However, please note this is temporary and usually goes away as the treatment continues. It is also advised to avoid the consumption of alcohol during the period of your treatment, as it may worsen the dizziness.

#6. How long will I have to continue taking the medication?

Ponstan 250mg Tablet 10 'S is prescribed to be applied for 7 days or as advised by your doctor.

Alcohol is known to make an individual dizzy, thus if taken with the medication may lead to extreme dizziness. It is best to avoid the intake of alcohol during the period of your treatment. Alcohol can also increase the risk of gastrointestinal complications while using Ponstan 250mg Tablet 10 'S.

#8. Can I drive after taking this medication?

This drug has a history of making people dizzy, so if this happens to you, don't drive or use any heavy machinery.

No, Ponstan 250mg Tablet 10 'S is not recommended for infants

#10. What lab tests will be prescribed while treatment with Ponstan 250mg Tablet 10 'S?

Adjunct laboratory tests may be performed to help select the appropriate dosage (such as blood tests, liver, and kidney function).

#11. What dietary instructions are to be followed when using Ponstan 250mg Tablet 10 'S?

Continue to eat normally until your doctor tells you to switch to a specific diet.