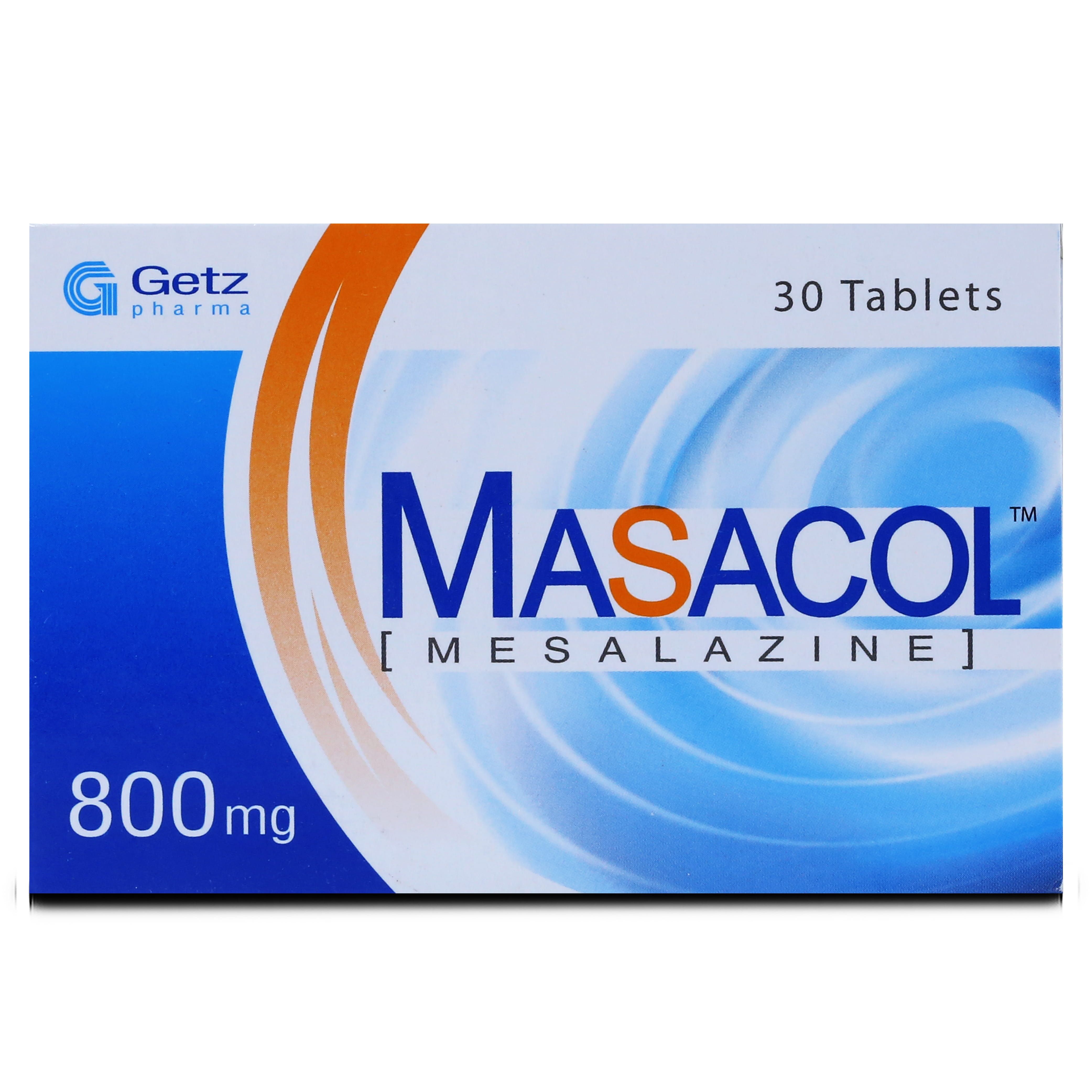 The digestive tract in the human body aids in processing edible sustenance by extracting nutrients and water from it and discarding the waste, passing it down to the rectum to be excreted. An inflammatory bowel disease (IBD) constitutes a group of GIT conditions affecting people globally. Ulcerative colitis is an IBD that majorly affects the colon.  Masacol 800mg Tablet 10 'S belongs to a class of drugs called Aminosalicylates, used to manage inflammation of the bowels. It can help combat and prevent and abate these conditions into remission which is known to have a frequently recurring pattern.

Masacol 800mg Tablet 10 'S is chemically composed of Mesalazine, which works by controlling the inflammation of the colon, achieved via several mechanisms, one being inhibiting the production of inflammatory chemicals such as leukotrienes and prostaglandins from the inner coverings of the gut. Time taken by Masacol 800mg Tablet 10 'S to give you relief depends on the severity of your symptoms and may take a few weeks before you start feeling better.

Masacol 800mg Tablet 10 'S is chemically composed of Mesalazine, which works by controlling the inflammation of the colon, achieved via several mechanisms still unclear. However, one theory suggests inhibiting the production of inflammatory chemicals such as leukotrienes and prostaglandins from the inner coverings of the gut helps alleviate inflammation.

It is usually taken at 8 to 12 hourly intervals.  Masacol 800mg Tablet 10 'S should be taken at a set time and for the prescribed length of time, not exceeding it. The patient in general starts to feel better in a couple of weeks, make sure to complete the entire course even if you feel better. Treatment can last for longer durations depending on your condition. The release mechanism is also crucial about its toe.

Slow Release: These types of medicines are formulated to release their chemical contents slowly after ingestion over some time to allow patients to gain benefits on a prolonged basis. Usually, these maintain steady levels in the blood and are required to be taken once or twice. These are labeled as “SR” at the end of the brand name.

Delayed-release:  These types of medicines are formulated to release their chemical contents sometime after taking them orally. The coating on these medicines prevents the drug to be used up too soon. These may be labeled as “DR” at the end of the brand name.

Treatment: A total of 1.6 to 2.4 g to be taken orally every day, in three divided doses

Prevention/ maintenance of remission: 1 to 1.6 g to be taken orally every day, in three divided doses

Treatment: A total of 4 g to be taken orally in four divided doses, as 2 tablets per dose

Prevention/ maintenance of remission: A total of 2 g (4 tablets of 500 mg per day) to be taken orally in two divided doses

Masacol 800mg Tablet 10 'S can be given safely to children 5 years and above. Follow your doctor’s prescription

Treatment normally lasts for 6 to 8 weeks

The safety concerns of Masacol 800mg Tablet 10 'S in the elderly population are valid, hence caution must be taken. Your doctor should set the most appropriate dose for you based on your medical history. Doses are adjusted according to a liver impairment or other medications being taken concurrently with the current disease status, or other serious conditions.

Pregnancy Use And Lactation

If you are breastfeeding an infant ask your doctor if the amount of medicine secreted into breast milk is unclear. With regards to safety please make sure to consult your doctor first before taking it.

Please inform your doctor if you have a history of any before using Masacol 800mg Tablet 10 'S:

Interaction With Other Medications

Following drugs can interact with Masacol 800mg Tablet 10 'S and potentiate or reduce the effects when used concomitantly. Some of these drugs are:

Like most medicines, Masacol 800mg Tablet 10 'S has some side effects which include:

HOW TO COPE-UP  WITH SOME ADVERSE EFFECTS

Allergic Reactions - Allergic reactions to the drug may be mild to severe or potentially could be life-threatening. If allergy is suspected immediately take anti-allergy (antihistamine) medicine which will stop the mild reaction. If a serious allergic reaction is suspected, rush to the nearby hospital and avoid Masacol 800mg Tablet 10 'S and drugs with similar compounds in the future.

Headaches - In which case make sure you rest and drink plenty of fluids. Avoid the use of alcohol. Take a prescribed painkiller. Consult your doctor if the headaches last longer than a week or are severe

Skin Rash - Can be eased by applying soothing and healing lotions or creams such as calamine lotion/cream. Apply a cold compress to the rash to help reduce itchiness and redness caused by the rash. Antihistamine (prescribed by a doctor) is also recommended as an effective way to combat any skin rash.to bring ease as well. Avoid high-intensity exercise while suffering from muscular pain.

Constipation - Can be combated by adding more fibers to the patient’s diet, asking the patient to drink plenty of fluids, and increasing their physical activity to trigger contractions in the intestines.

Fatigue - Patients experiencing this adverse effect are advised to take deep breaths, intake tea or coffee, get a good night’s rest, and not overburden themselves for a few days.

Flu-like symptoms - To manage symptoms, patients are advised to drink plenty of fluids and get plenty of rest and sleep. Take an antihistamine, a nasal decongestant, or a lozenge to feel better when needed.

Masacol 800mg Tablet 10 'S shows enhanced digestive effects on the body by inhibiting certain chemicals such as dopamine and acetylcholinesterase, which mediate prokinetic effects. It affects the tone of the food pipe (esophagus) and contractive forces of peristalsis aid in digestion, and help prevent reflux of stomach contents as well as prevent vomiting.

Masacol 800mg Tablet 10 'S is taken as per doctors' recommendation, depending on your condition. It the commonly prescribed for 8 weeks or so but the duration may vary, follow your prescription strictly.

No, it is not considered to be addictive and does not cause any dependence (physical and psychological)

Consuming alcohol when taking Masacol 800mg Tablet 10 'S may cause undue intestinal irritation and could increase the risk of side effects, hence should be avoided or restricted to small amounts.

If you have taken too much of the prescribed Masacol 800mg Tablet 10 'S you may experience symptoms of overdose, for example, fast or irregular heartbeat, upset stomach, blurred vision, fainting, dizziness, abdominal pain, or life-threatening severe symptoms. Contact your doctor or rush to the nearby emergency immediately if you have any of these symptoms.

Masacol 800mg Tablet 10 'S is taken 2-3 times a day, one hour before meals so you can take the missed dose as soon as you remember unless it's less than 6 hours until your next dose if you are taking regular tablets. If the period for the next period is near, you should skip the missed dose. If it helps to remind you, set the alarm or use a pill organizer or a mobile application so you do not miss any dose. Make sure to complete your course of treatment even if you feel better and think you do not need to take it anymore.

#7. Can I Take Masacol 800mg Tablet 10 'S During Pregnancy Or Breastfeeding

Store it at room temperature, away from excess heat, direct sunlight, and moisture. Make sure it is not consumed by pets, children, and other people. Dispose of unused medicine when treatment is over.

#10. Are there any lifestyle changes that can help me with my condition?

Small changes in your daily lifestyle can help you with symptoms of colitis which is a recurring condition affecting individuals for life: