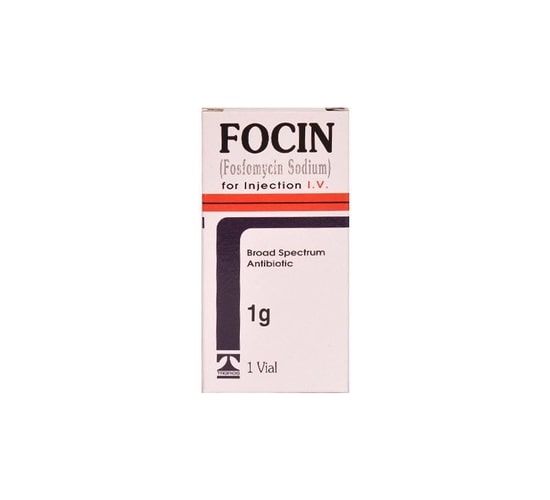 Focin IV 1gm Injection 1 vial is an antibiotic that performs the main function of treating bladder infections in women such as acute cystitis or urinary tract infection. Focin IV 1gm Injection 1 vial is specially manufactured to treat bacterial infections and will not work if injected to treat viral infections. The medicine should only be injected on the prescription of a doctor and should not be injected for problems other than its relevant functions such as kidney problems, as that may lead to side effects.

The results commonly take up to 2-3 days to notice. Doctors should be informed about the patient having any sort of kidney problem before being prescribed Focin IV 1gm Injection 1 vial. Patients are required to not consume alcohol or smoke marijuana as it can cause extreme dizziness. The injection or infusion of Focin IV 1gm Injection 1 vial should be done by a doctor or as instructed by the doctor. In the infusion, the patient will be required to intake 2-3 doses a day.

The medicine might also contain components of sugar hence the patients with diabetes are required to consult a doctor about the intake of medicine. The most common side effect that the Focin IV 1gm Injection 1 vial causes is diarrhea which eventually stops when the consumption of medicine is discontinued. Other side effects can include nausea, headache, dizziness, unusual weakness, or vision changes. If Focin IV 1gm Injection 1 vial causes blood in the stool then the patient is required to inform the doctor right away.

Focin IV 1gm Injection 1 vial can be used to treat:

How Does The {{Product}} Work

Focin IV 1gm Injection 1 vial is an antibiotic that performs the function of killing bacteria or stopping them from doing any damage inside the body by stopping their reproduction which also supports the body's immune system to fight the bacterial infection.

The product is not recommended for children under the age of 12. Children ranging between 12-to and 18 are commonly prescribed half the dosage prescribed to adults in severe cases if considered necessary by the doctor.

For IV infusion 8 mg per dose is injected 2-3 doses per day. The doses can also vary by the patient's condition and reaction to the medicine. 12-24 mg is commonly advised by the doctor for adult patients.

Pregnancy Use And Lactation

The medicine has shown no risk or damage to pregnant women or their fetuses, but they are still required to avoid and only inject it if considered highly necessary and under the supervision of a medical expert.

The nursing mothers are advised to refrain from the installation of Focin IV 1gm Injection 1 vial as it possibly can be excreted in the breast milk. If the injecting of medicine is highly necessary, it is advised that breastfeeding be discontinued for some time. The excretion of medicine in breastmilk has shown no signs of damage or risk but it can still be a potential risk to inject medicine while nursing.

Interactions With Other Medicines

Like most medicines,Focin IV 1gm Injection 1 vial has certain side effects which include

How To Cope With SOme Adverse Effects

Headaches- In which case make sure you rest and drink plenty of fluids. Avoid the use of alcohol. Take a prescribed painkiller. Consult your doctor if the headaches last longer than a week or are severe

Feeling or being sick (nausea or vomiting) or diarrhea -Avoid eating rich or spicy food. It might help to take medication after food. If you're sick, try drinking small, frequent sips of water.

Feeling dizzy (lightheaded) or weak -If the medication makes you feel dizzy or weak, stop what you're doing and sit or lie down until you feel better, and do not rise too fast or immediately from a sitting or lying down position to a standing posture. Do not drive or use tools or machinery in case of any of these effects

Blurred vision- this side effect tends to go away on its own if a few days; patients are advised to not operate heavy machinery or drive any motorized vehicles in the meantime.If blurred vision persists, please contact your doctor.

Weakness- Patients experiencing this adverse effect are advised to take deep breaths, intake tea or coffee, get a good night’s rest, and not overburden themselves for a few days.

Q1. CAN Focin IV 1gm Injection 1 vial BE USED IF PATIENT IS HAVING FLU SYMPTOMS?

Focin IV 1gm Injection 1 vial is to be kept away from the reach of children, in a cool dry place away from direct sunlight and humidity as that tends to ruin certain drugs.

Q3. WHAT IF I TAKE TOO MUCH OF Focin IV 1gm Injection 1 vial?

If you miss a dose of the medication, make sure you take it as soon as possible on that same day. If you don’t remember you missed the dose until the next dosage time or the next day, do not double the dose and take your medication as per schedule.

No, there isn't sufficient evidence to suggest that patients experience a decrease in libido.

Q6. Can I Take Focin IV 1gm Injection 1 vial During My Pregnancy?

Yes,Focin IV 1gm Injection 1 vial is deemed safe to be ingested during pregnancy under the care and supervision of a medical professional.

No, there isn't sufficient evidence to suggest that patients experience a decrease in fertility.

Q8. CAN Focin IV 1gm Injection 1 vial CAUSE DIZZINESS? IF SO, HOW SHOULD I MANAGE IT?

Yes. It can cause dizziness as one of the most common side effects. If this happens, you should sit or lie down until the symptoms pass. However, please note this is temporary and usually goes away as the treatment continues. It is also advised to avoid the consumption of alcohol during your treatment, as it may worsen the dizziness.

Alcohol is also known to lower your blood pressure which if taken with the medication may lead to extreme dizziness. It is best to avoid the intake of alcohol during your treatment

Q10. CAN I DRIVE AFTER TAKING THIS MEDICATION?

This medication is known to make you dizzy hence if that happens kindly avoid driving or operating any heavy machinery.